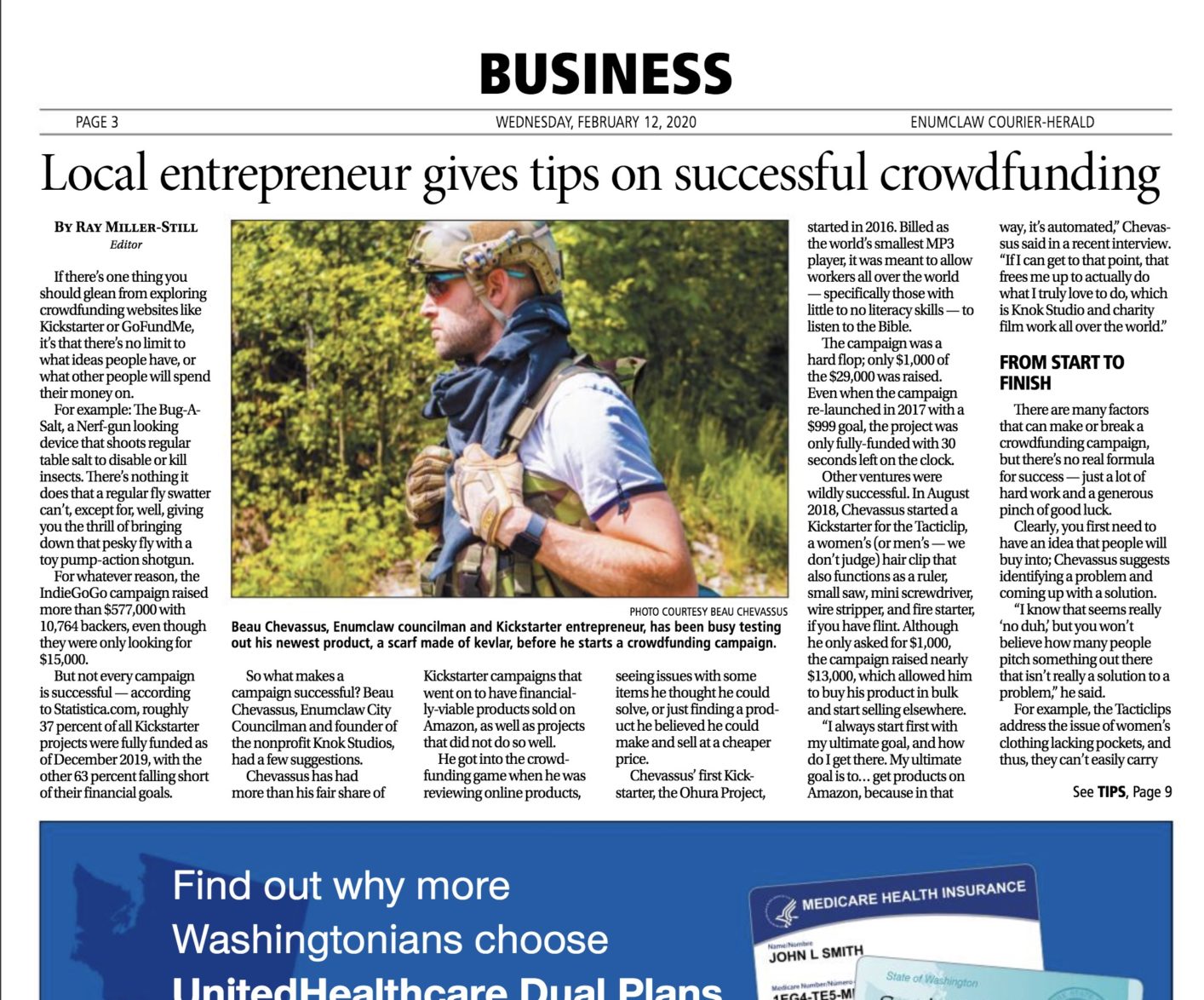 If there’s one thing you should glean from exploring crowdfunding websites like Kickstarter or GoFundMe, it’s that there’s no limit to what ideas people have, or what other people will spend their money on.

For example: The Bug-A- Salt, a Nerf-gun looking device that shoots regular table salt to disable or kill insects. There’s nothing it does that a regular fly swatter can’t, except for, well, giving you the thrill of bringing down that pesky fly with a toy pump-action shotgun.

But not every campaign is successful — according to Statistica.com, roughly 37 percent of all Kickstarter projects were fully funded as of December 2019, with the other 63 percent falling short of their financial goals. 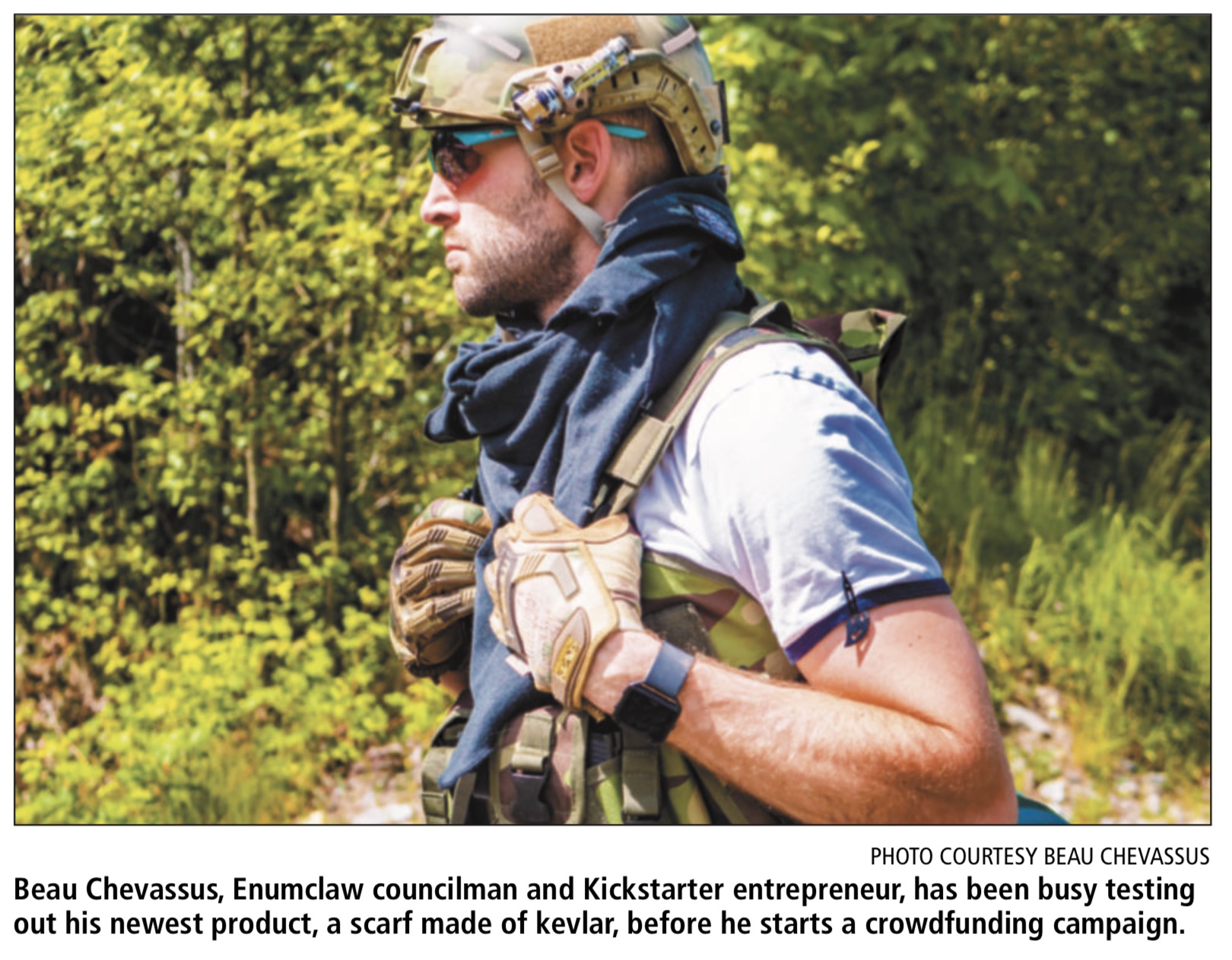 Beau Chevassus, Enumclaw councilman and Kickstarter entrepreneur, has been busy testing out his newest product, a scarf made of kevlar, before he starts a crowdfunding campaign.

started in 2016. Billed as
the world’s smallest MP3 player, it was meant to allow workers all over the world — specifically those with little to no literacy skills — to listen to the Bible.

Other ventures were wildly successful. In August 2018, Chevassus started a Kickstarter for the Tacticlip, a women’s (or men’s — we don’t judge) hair clip that also functions as a ruler, small saw, mini screwdriver, wire stripper, and fire starter, if you have flint. Although he only asked for $1,000, the campaign raised nearly $13,000, which allowed him to buy his product in bulk and start selling elsewhere.

“I always start first with my ultimate goal, and how do I get there. My ultimate goal is to… get products on Amazon, because in that way, it’s automated,” Chevassus said in a recent interview. “If I can get to that point, that frees me up to actually do what I truly love to do, which is Knok Studio and charity film work all over the world.”

FROM START TO FINISH

There are many factors that can make or break a crowdfunding campaign, but there’s no real formula for success — just a lot of hard work and a generous pinch of good luck.

Clearly, you first need to have an idea that people will buy into; Chevassus suggests identifying a problem and coming up with a solution.

“I know that seems really ‘no duh,’ but you won’t believe how many people pitch something out there that isn’t really a solution to a problem,” he said.

For example, the Tacticlips address the issue of women’s clothing lacking pockets, and thus, they can’t easily carry around a multi-tool device. After you have your idea, it’s time to start research- ing — specifically, how the crowdfunding market operates and what potential investors expect.

“In times past, if you want to start a business, you would get a whole bunch of capital together, get a five- year business plan, find a storefront, and you hit the ground running. You’re going to gamble and hope that consumers come in,” he said. “On Kickstarter, it’s the opposite — you don’t have a product, and you actually sell something that doesn’t quite exist, and you get your customers around you, and then you start the business.”

But that doesn’t mean you should start a Kickstarter with nothing but that idea in your head and hope people are interested. “Lay pipe before you actually launch,” Chevassus said. “Get all of your contacts in a row. Get all your marketing stuff in line.”

He admitted that for his first projects, ones that started before 2016, he didn’t follow his own advice.

“I was like, I’m going to wait until the capital comes in. I don’t want to waste time on something that won’t be funded,” he continued. “I’ve learned the vital importance of actually buying proof- of-concept products from multiple factories, which takes some money to do.”

In other words, you have to spend money to make money; Chevassus is doing this with a new clothing product he expects to launch soon.

“They’re like, ‘You want a kevlar, bullet-proof, slash- proof, fire-proof scarf? Well, that’s going to be $70 shipped from our factory,’” he said, adding that situations like that can be scary, especially for someone just starting out. “But I’d much rather have a tangible prod- uct before I go to a thousand people and promise it can be done. “It’s kind of the chicken or the egg — you need the capital to create it, but you have to create it to raise the capital,” Chevassus continued.

But that does not need your prototype needs to be perfect and complete. In fact, Chevassus warned against what he called “analysis paralysis.”

“‘Done is better than perfect,’” he said, quoting Sheryl Sandberg, the COO of Facebook.
“I want to be careful with that, because a lot of people then say, ‘Does that mean you can’t strive for perfection?’ No, it means don’t get obsessed with all the little details to the point where you don’t progress.” 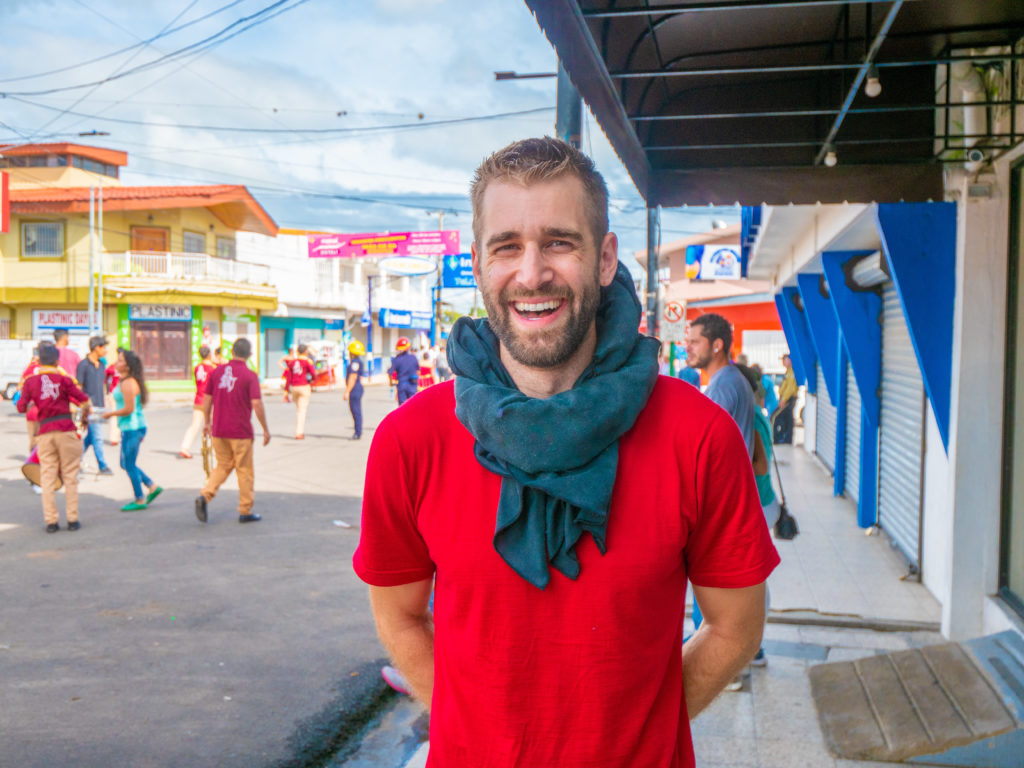 As for the marketing portion of the Kickstarter, you may want to get in contact with “influencers” — people who review and market products online — to talk up your idea or product around the time your campaign begins. However, Chevassus believes there’s no real formula for success- fully finding an influencer who would be interested in helping you out.

“It’s saturation. You just have to tell yourself, for every 10 people I contact, one person is going to say, ‘This matches my blog audience, I’d love to do it,’” he said.  All of this, Chevassus said, is a lot of work—more than what some people expect.

“Be prepared to work 16 hour days. It is not easy. A lot of people are like, ‘They float this out there and they’re just going to relax and retire early in the Bahamas,’” he continued. “No, no, no. When people say passive income, there is nothing passive about [it]. It takes so much hard work to get to the point of automation.” At this point, a crowdfunding campaign should be well prepared: there’s a working prototype and a manufacturer that is willing to create the product; there are people who are talking up your product and sending their followers to the campaign; and the campaign is active and engaging its investors with updates on what’s happening behind the scenes, keeping the anticipation alive.

But nothing ensures a successful campaign, and at some point, you may want to consider quitting while you’re behind.

“To answer the question, ‘When do you quit?’ is when you are no longer providing a solution,” Chevassus said, “Again, that sounds
like a ‘no duh,’ but you won’t believe how many people don’t actually bring their head above water and go, ‘the market is saturated with these things, I should pull the plug and focus elsewhere.’

to stick to this no matter what. You’re going to ride the market for five years, because banks want to see that five years. The want to see that you’re bought in and committed,” he continued. “Now, the new way of doing things is you have to adapt, which is a euphemism for quit. Quit things that aren’t working… Every successful crowd funder can relate to ‘giving up your Isaac’; that is, at some point it is necessary to let go of something. Some- thing you’ve invested count- less hours in. Something you’ve made that you’re emotionally committed to. This is extremely difficult to let go, but wildly necessary to focus like a laser beam on what’s truly important.”

To learn more about Chevassus, head to his blog at chevassus.com. 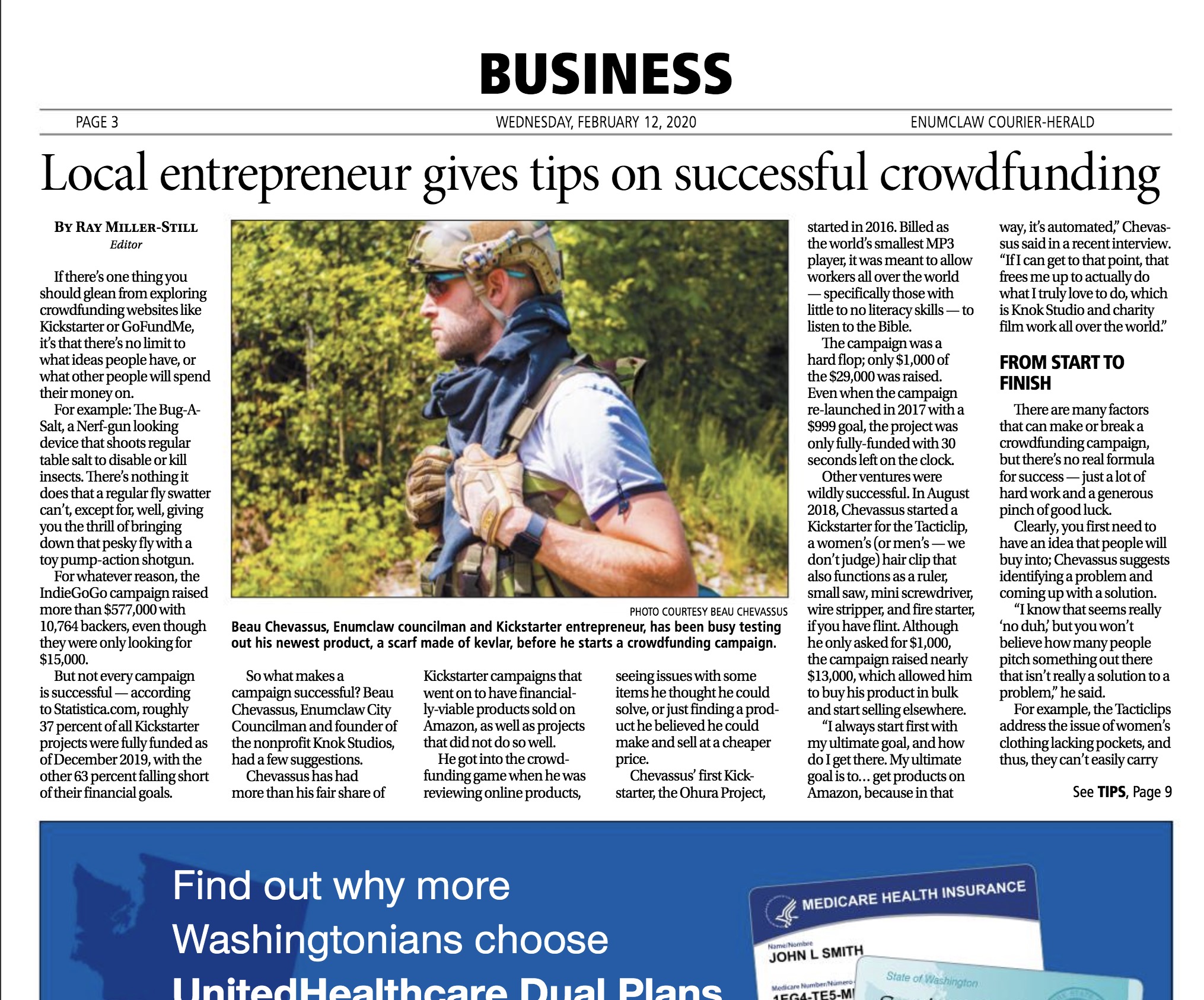 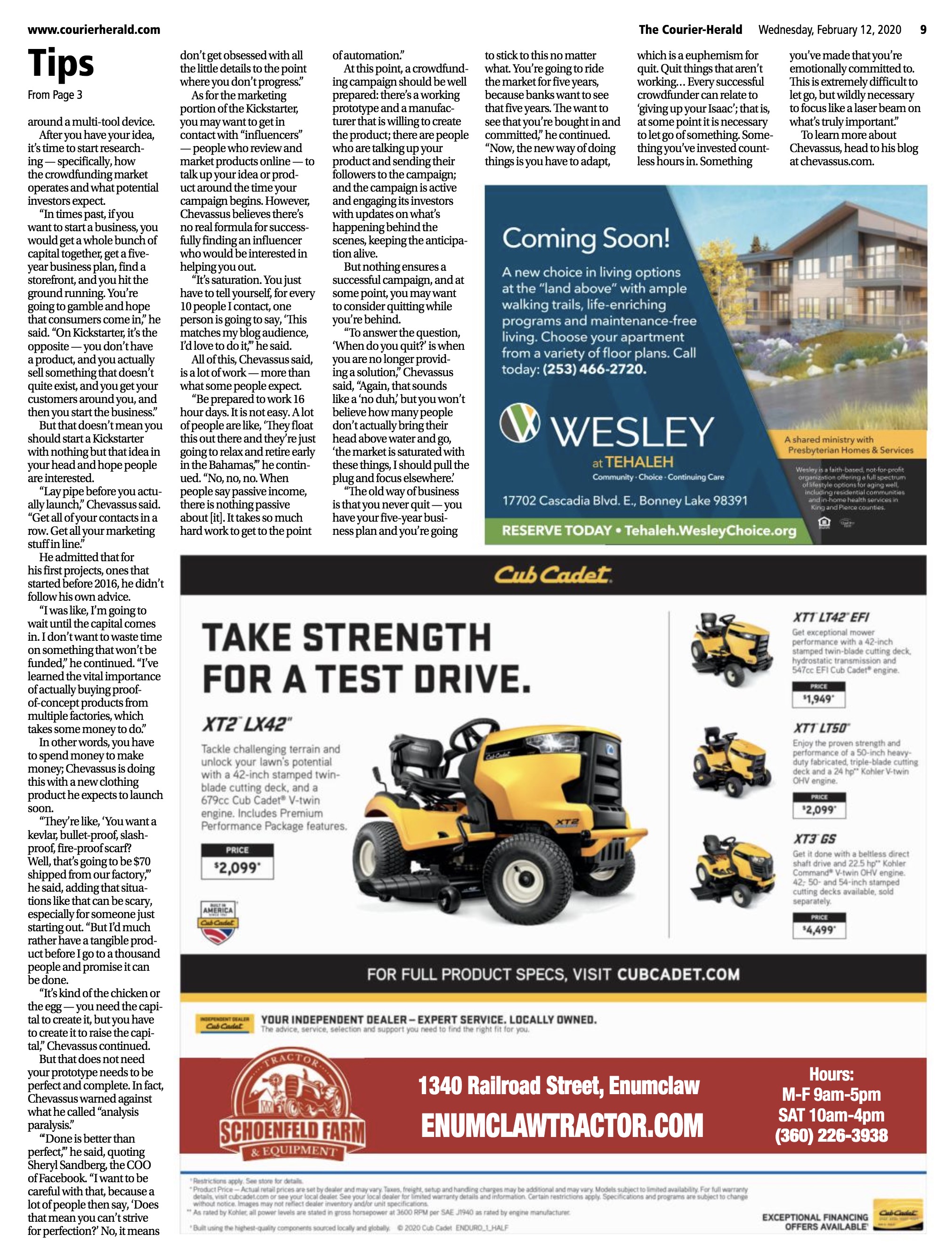